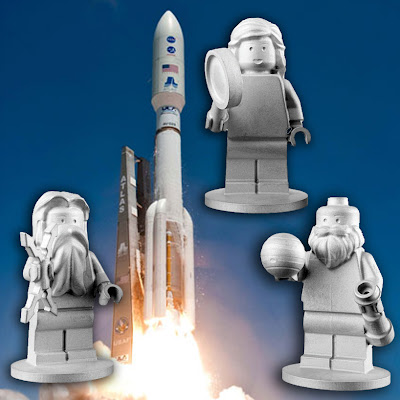 Okay, so they weren't really stowaways, but certainly not your expected passengers. The special cargo - three 1.5" tall aluminum LEGO® Minifigs- left earth on NASA's Juno deep-space probe on August 5th for a five-year mission to Jupiter as part of NASA and LEGO's Bricks In Space program, a joint partnership to inspire children and broaden awareness of the importance of planetary research. 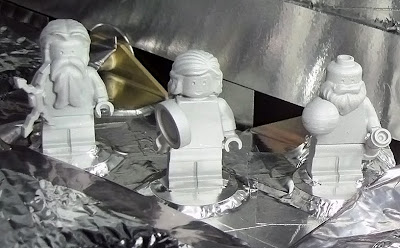 above: the Lego Minifigures affixed to the Juno probe before take-off. 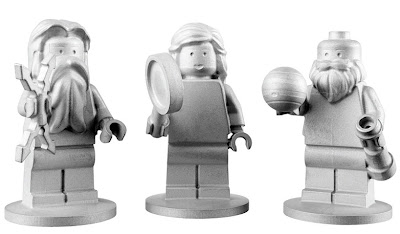 In Greek and Roman mythology, Jupiter drew a veil of clouds around himself to hide his mischief. From Mount Olympus, Juno was able to peer through the clouds and reveal Jupiter's true nature. Juno holds a magnifying glass to signify her search for the truth, while her husband holds a lightning bolt: 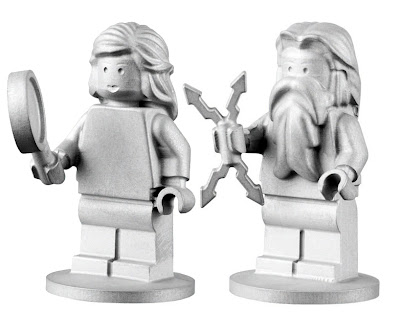 The third LEGO crew member is Galileo Galilei, who made several important discoveries about Jupiter, including the four largest satellites of Jupiter (named the Galilean moons in his honor). Of course, the miniature Galileo has his telescope with him on the journey: 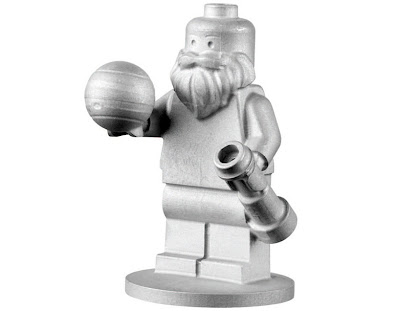 The LEGO Minifigures will help get attention for Juno’s mission to improve understanding of our solar system’s beginnings by revealing the origin and evolution of Jupiter. 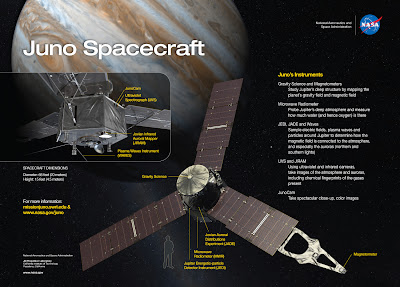 above: click to enlarge and get a better look at the Juno Spacecraft

The inclusion of the three mini-statues, or figurines, is part of a joint outreach and educational program developed as part of the partnership between NASA and the LEGO Group to inspire children to explore science, technology, engineering and mathematics. 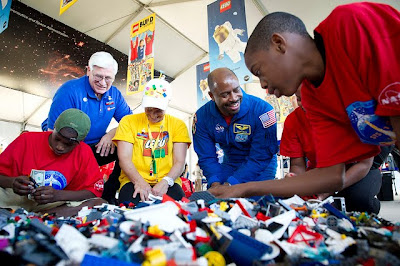 Video of the August 5th launch (on which the minifigs were affixed to the space probe):

The spacecraft is expected to arrive at Jupiter in 2016. The mission will investigate the gas giant's origins, structure, atmosphere and magnetosphere. Juno's color camera will provide close-up images of Jupiter, including the first detailed glimpse of the planet's poles.

More information about Juno is available at: http://www.nasa.gov/juno and http://missionjuno.swri.edu. You can follow the mission on Twitter at http://www.twitter.com/nasajuno.