The Balloon Bench and other Wild but Thoughtful Designs from H220430. 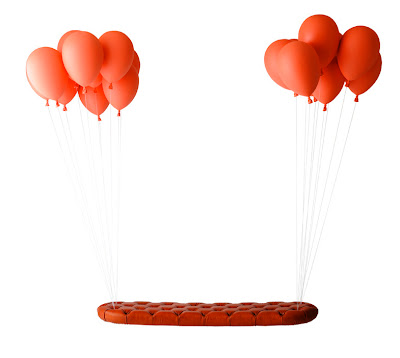 Satoshi Itasaka and Takuto Usami collaborated to establish "h220430" on April 30th, Heisei 22 (Heisei is the current era name in japan). Their design activities focus on lighting and furniture and other unusual items. But their objects and furniture are not just weird for the sake of being different. They are inspired by things that affect mankind and the state of the planet, such as nuclear war, melting glaciers, other designers, films and art and the juxtapotision of real and artificial.

The descriptions of the following products are taken directly from their site and therefore are written in the first person and may have some translation problems. 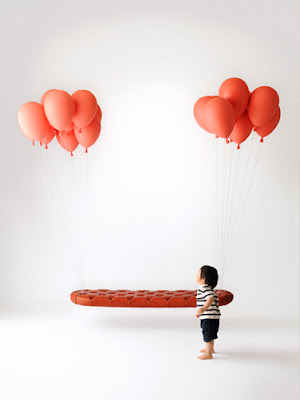 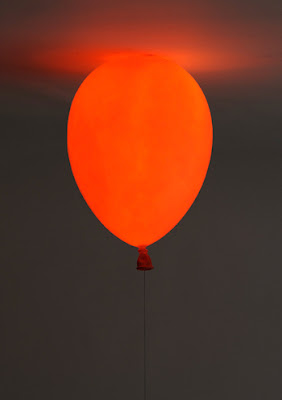 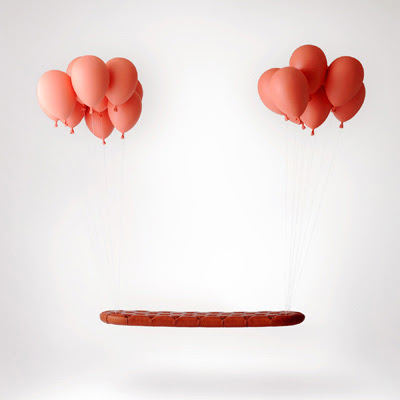 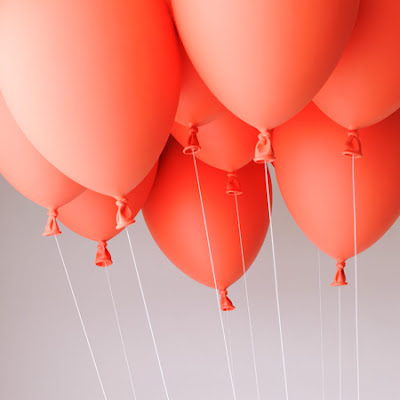 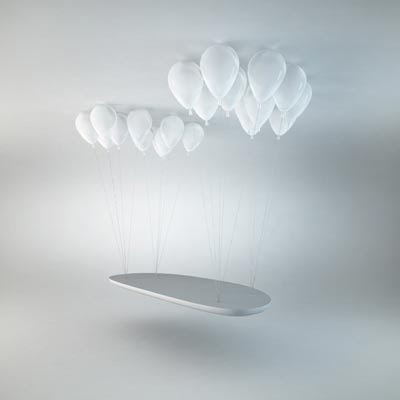 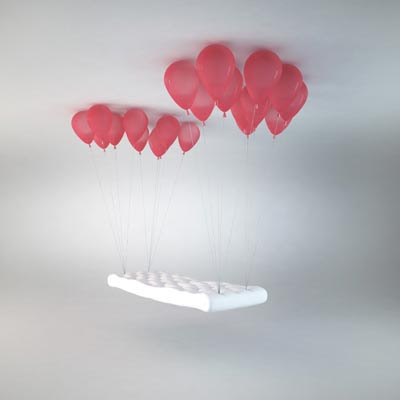 description: This bench was visually inspired by the feeling of floating that the main character felt in the French movie, “Le Ballon Rouge”(1953).

In reality the bench is suspended from the ceiling by 4 anchors concealed by the balloon shapes. This creates the illusion of the bench being lifted by balloons.

Available in red or white, the Balloon bench is sold by Somewhere of Tokyo 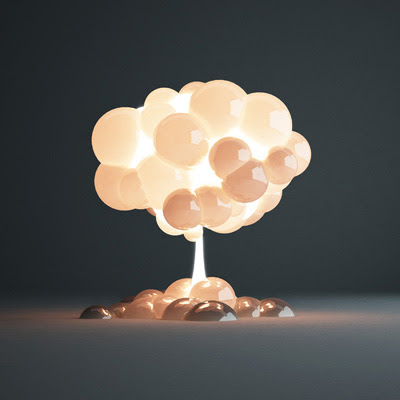 description: After the end of the Cold War between the US and the Soviet Union, the crisis of nuclear wars was believed to have disappeared. However, even after the Cold War, India, Pakistan, China, and France have continued the development of nuclear weapons. The number of nuclear powers is still increasing and the crisis of nuclear wars has not yet ended. At present, there exist (sic) the incredible total of 23,000 nuclear weapons, which are said to be capable of annihilating the whole earth several times over. Under these hopeless circumstances, what we can do to aim for a nuclear-free world is to have concern about this issue, to deepen our understanding, to have discussions and to continue to advocate the elimination of nuclear weapons. 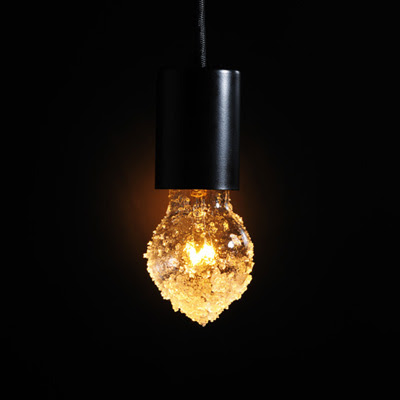 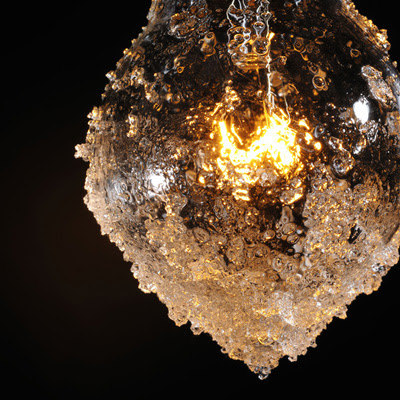 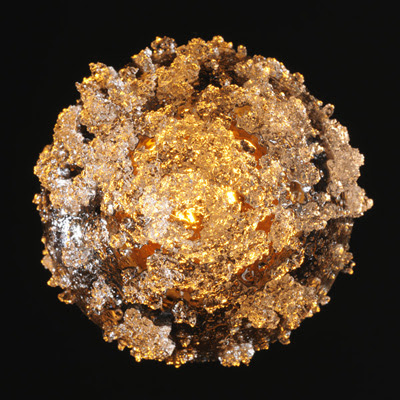 description: In recent years, the permafrost covering Siberia has started to melt very rapidly. It encapsulates the potent greenhouse gas, methane, which was produced over millions of years by bacteria that existed before the ice ages. Furthermore, there is a massive ice layer called Edoma in the permafrost that is no less than 40 meters thick. It has been discovered that Edoma contains an amount of high-concentration methane that is one thousand times that in the earth’s atmosphere. Once the permafrost on the surface, and then Edoma, start to melt, the issue of global warming will become even more serious.

We represented the melting Edoma, which might eventually disappear, with an incandescent lamp that is also disappearing, evoking the image of a faint light that glimmers while consuming methane in the deep ice.

It might be difficult to become conscious of what is happening far away from your daily life. However, this lamp must help broaden your perspective toward the global environment. You might be able to find a different point of view if you think about the future global environment under the melancholic yet mellow light of this lamp. 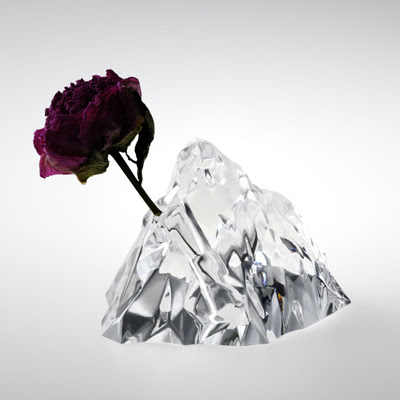 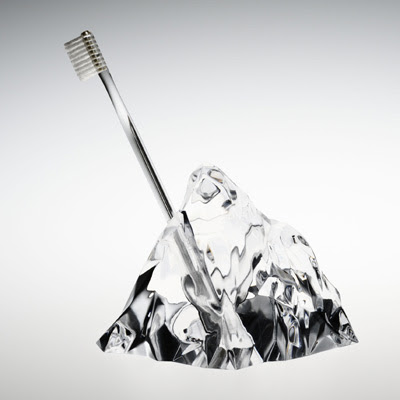 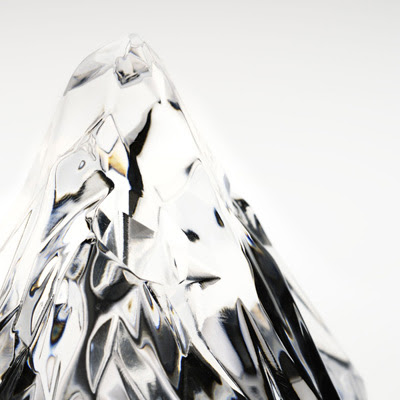 description: In the Antarctic Peninsula, there is one of the largest ice shelves called Larsen. It consisted of a series of three shelves, namely Larsen A, B and C, from the north. Ice shelf Larsen A was regarded to have existed for more than two thousand years before its disintegration in 1995. Then, in 2002, huge ice shelf Larsen B broke up after an existence extending back 12 millennia. Those disintegrations in recent years caused a tremendous amount of ice loss, which corresponds to an area more than six times as large as Tokyo. Only ice shelf Larsen C remains, but unfortunately, its disintegration, too, is just a matter of time.

We created an acrylic object and named it Larsen C, which will remind you of an iceberg split from a disintegrating ice shelf floating in the sea. It has two holes in the top, and you can use it as a toothbrush holder or, by putting it into another vessel with water, as a bud vase. When it is wet, Larsen C looks even more like a real iceberg melting off the shelf, which will make you speculate more realistically about the serious condition of the Antarctic area, even though it is far away.

We would be glad if the users come to think about global warming and consequently take some actions to prevent it by using Larsen C in their daily lives. 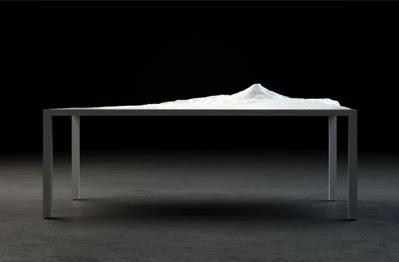 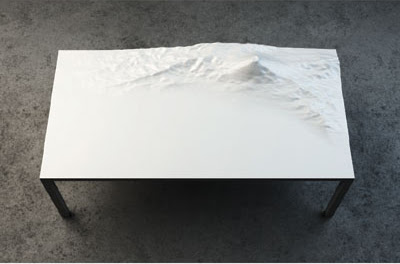 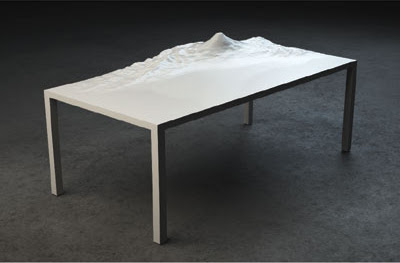 description: This table is homage to “Powers of Ten”, which is the short film created by Charles Eames in 1968.

Our narrow-mind is one of the reasons for causing a conflict or environmental problems. The issues, we are currently facing in this world, would be better if we have a broad mind with large scale vision when we think the issues at the table as it described in “Powers of Ten." 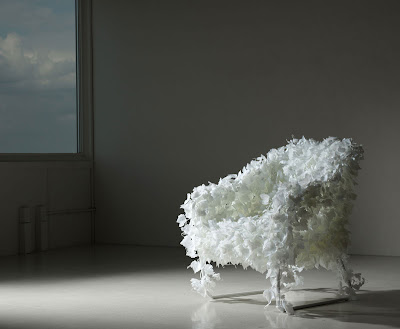 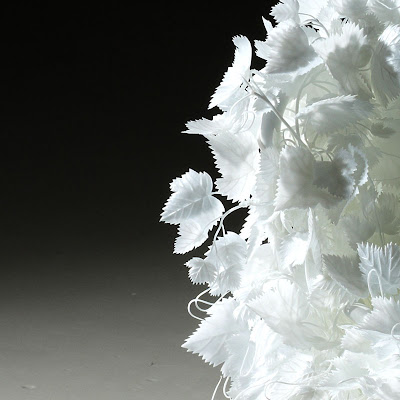 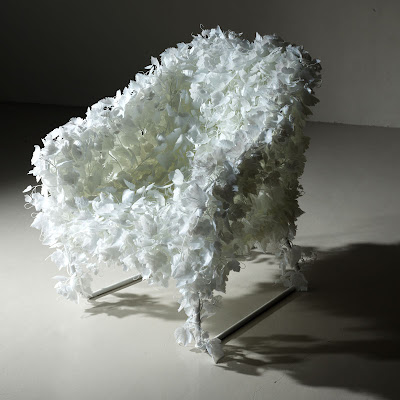 description: Living in the city where nature is excluded to the utmost limit, we tend to forget that we depend on the power of nature and only remember it when natural disaster strikes. However, I believe that it is essential that we should appreciate nature and always respect it.

The white but otherwise realistic leaves of “ivy chair” act as a metaphor for the exclusion of nature from the city.

The artificial white color of “ivy chair” merges it into daily life without a sense of incompatibility. The intention of “ivy chair” is to make you feel comfortable as if you were surrounded by trees and flowers. Whenever you sit down in the chair it will prompt you to think about nature over its function as a chair. 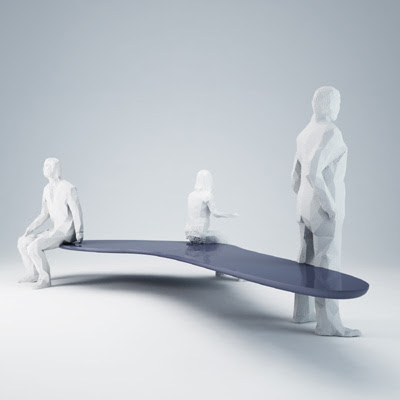 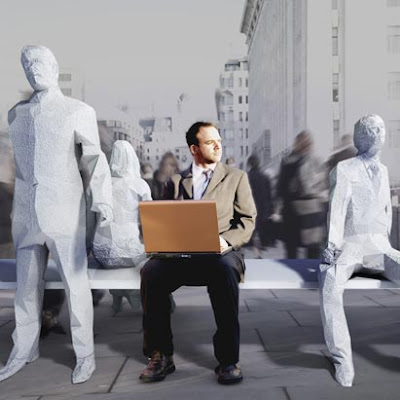 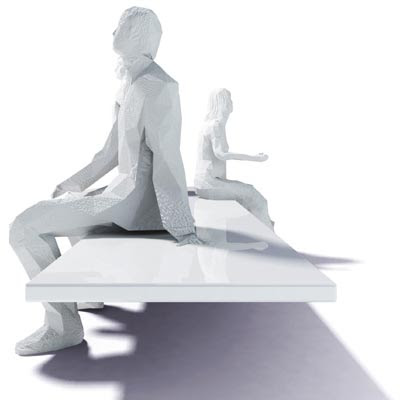 description: In addition to ideas such as comfort and endurance which have traditionally been associated with benches, I should like to add the concept of mental well being. (I believe this topic is common to all product designs.) To address this issue, I produced the MIMIC BENCH.

At a first glance, the bench appears to be floating on it's own. In reality three manikins have been integrated with the bench to support it. I hope that by placing the bench in an area where the public gather the MIMIC BENCH will improve the condition of it’s surrounding and it’s users.