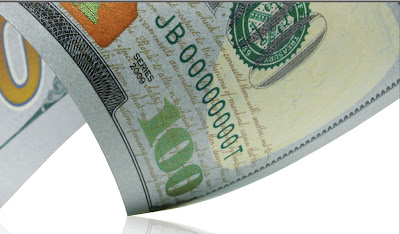 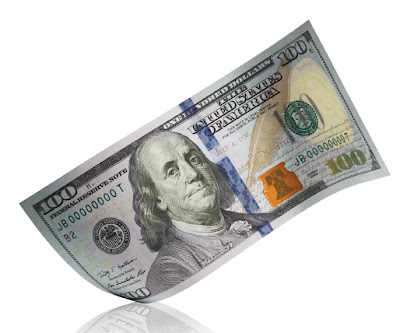 There are a number of security features in the redesigned $100 note, including two new features, the 3-D Security Ribbon and the Bell in the Inkwell. These security features are easy for consumers and merchants to use to authenticate their currency. 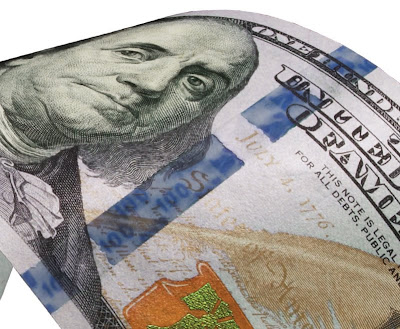 The blue 3-D Security Ribbon on the front of the new $100 note contains images of bells and 100s that move and change from one to the other as you tilt the note. The Bell in the Inkwell on the front of the note is another new security feature. The bell changes color from copper to green when the note is tilted, an effect that makes it seem to appear and disappear within the copper inkwell.

The new $100 note also displays American symbols of freedom, including phrases from the Declaration of Independence and the quill the Founding Fathers used to sign this historic document. Both are located to the right of the portrait on the front of the note.

Although less than 1/100th of one percent of the value of all U.S. currency in circulation is reported counterfeit, the $100 note is the most widely circulated and most often counterfeited denomination outside the U.S.

The New Security Features
Below is a close-up look at the new features to help you learn how to identify the real thing and use the two advanced security features: the 3-D Security Ribbon and the Bell in the Inkwell. 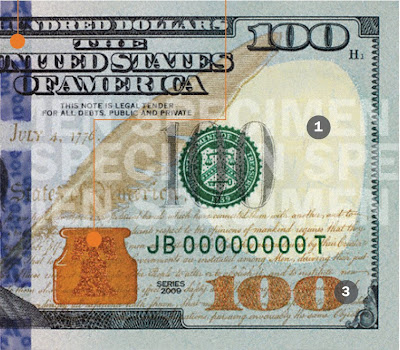 1. Portrait Watermark
Hold the note to light and look for a faint image of Benjamin Franklin in the blank space to the right of the portrait.
3. Color-Shifting 100
Tilt the note to see the numeral 100 in the lower right corner of the front of the note shift from copper to green. 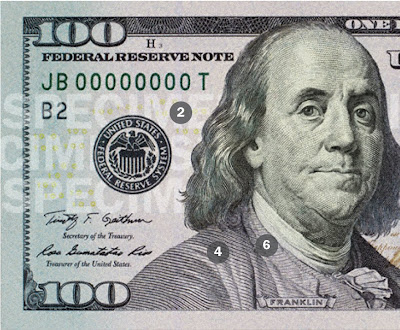 2. Security Thread
Hold the note to light to see an embedded thread running vertically to the left of the portrait. The thread is imprinted with the letters USA and the numeral 100 in an alternating pattern and is visible from both sides of the note. The thread glows pink when illuminated by ultraviolet light.

4. Raised Printing
Move your finger up and down Benjamin Franklin’s shoulder on the left side of the note. It should feel rough to the touch, a result of the enhanced intaglio printing process used to create the image. Traditional raised printing can be felt throughout the $100 note, and gives genuine U.S. currency its distinctive texture.

6. Microprinting
Look carefully to see the small printed words which appear on Benjamin Franklin’s jacket collar, around the blank space containing the portrait watermark, along the golden quill, and in the note borders.

5. Gold 100
Look for a large gold numeral 100 on the back of the note. It helps those with visual impairments distinguish the denomination.

FW Indicator (not shown here)
The redesigned $100 notes printed in Fort Worth, Texas, will have a small FW in the top left corner on the front of the note to the right of the numeral 100.
If a note does not have an FW indicator, it was
printed in Washington, D.C.

The note will begin circulating in February, 2011. All U.S. currency remains legal tender, regardless of when it was issued. Visit www.newmoney.gov where you can watch an animated video, click through an interactive note.
at 7:00 AM
Email ThisBlogThis!Share to TwitterShare to FacebookShare to Pinterest
Labels: currency, dollar bill art, money, new design