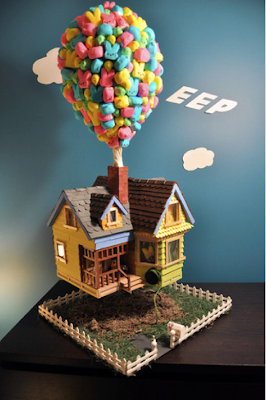 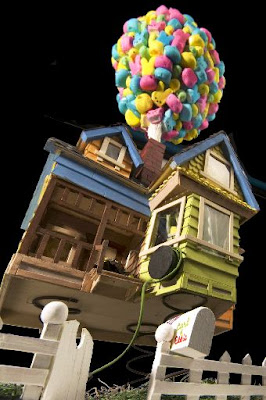 Easter kind of snuck up on me this year, so forgive my last minute entry, but I couldn't very well forget to share with you the winners, finalists and some of my favorite semifinalists of the always fun Annual Washington Post Peeps Show!

The 2010 Peeps Diorama Show Winner, the finalists and my fave semifinalists:

above: EEP! For their winning diorama based on the Pixar flick "Up," Michael Chirlin and Veronica Ettle of Arlington constructed a miniature Victorian house from plywood and Popsicle sticks, and placed it atop salvaged mattress springs to give it an airborne quality. 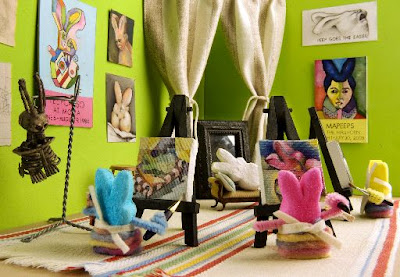 Above: An art student and figure model, Silver Spring resident Phyllis Mayes was inspired by figure painting classes for her diorama, titled "Creating a Masterpeeps." The walls are decorated with study drawings, paintings and art exhibit posters, all created by Mayes. 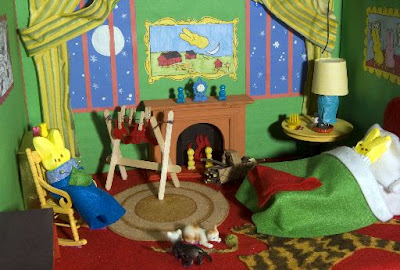 above: Based on the children's book "Goodnight Moon" by Margaret Wise Brown, this diorama by MaryLea Harris of Fairfax captures the quiet mood of the story. Harris used fishing line to suspend the red balloon, and, with the exception of the fireplace and rocking chair, created the diorama out of items she had on hand.

"Freedom is not free: A Peeps tribute to the veterans of the Korean War." 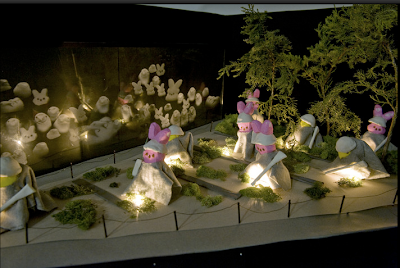 Above: Elizabeth Teuwen, Gregory Stackel and Genevieve Sapir of the District were inspired by the Korean War Veterans Memorial for their diorama, titled "Freedom is not free: A Peeps tribute to the veterans of the Korean War." A string of lights replicates the ground-level lighting at the memorial. 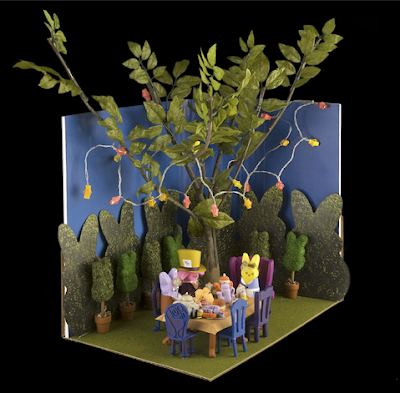 above: "The Mad Hatter's Peep Party" incorporates bunny-shaped topiaries, handmade paper lanterns and an abundance of Sculpey. The scene was created by Amy Billingham of Kensington and Rob Black and Lauren Emeritz of the District.

A few of my favorite semifinalists:

"Where the Wild Peeps Are" 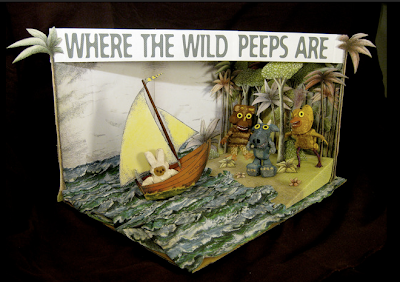 above: Margaret Cooney and Adam Matuszeski of the District were inspired by Maurice Sendak's classic book for their "Where the Wild Peeps Are" creation. The husband-and-wife pair notes: "Each of the Wild Peeps has a teddy bear or bunny Peep body with either a bunny, teddy bear, or a chick Peep for a head. The eyes are thumbtacks while arms, legs and snouts are made from Peep parts or finger puppets." 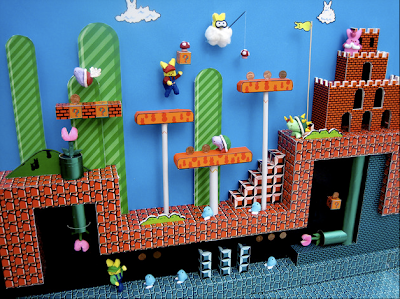 above: Mark Rivetti of Silver Spring took about 45 hours to create this "Super Peepio Brothers" diorama, and he crafted all of the characters, including Mario, Luigi, Lakitu, Bowser, Koopa Troopas, Goombas and Piranha Plants from either chick or bunny Peeps. Note the Peep shapes in mountains, platforms and clouds. 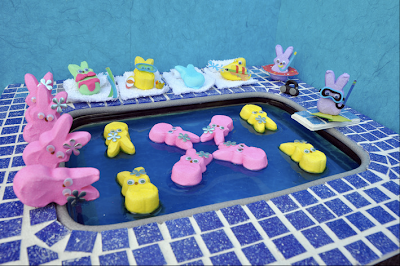 above:"Synchronized Peeping Practice" by Rebecca Glassman of Sterling offers a peek into synchronized swimming practice, as coordinated swimmers dive into a gelatin pool while a Peep with a snorkel and scuba fins waits on the diving board. 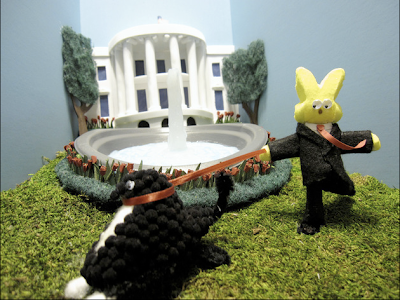 above:"All of Washington buzzed when President Obama ran down the South Lawn of the White House, showing off the family's new dog, Bo," writes Lauren Lien of Arlington. In her "Little Bo Peep" diorama, Lien captures the moment as the president, red tie flapping in the breeze, jogs with Bo.

"The Mad Peeps of Sterling Coopeep" 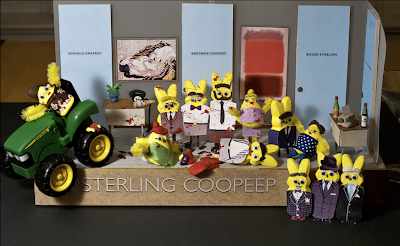 above: Seattle resident Jeana Harrington's diorama, "The Mad Peeps of Sterling Coopeep," re-creates the third-season episode of the TV show "Mad Men": "Guy Walks Into an Advertising Agency." In the scene, tipsy secretary Lois Sadler has just run over a visitor's foot with a John Deere lawnmower. The cast includes Bertram "Bert" Coopeep, Donald Drapeep and Peepy Olson, and the office features a miniature Rothko and a Hokusai. 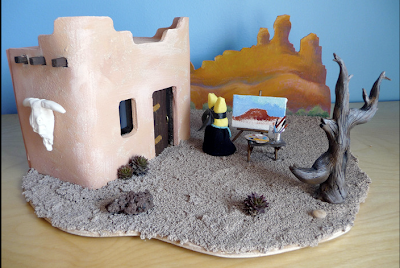 above: Gwen Jones of Hampton was inspired by the paintings of artist Georgia O'Keeffe for her "Georgia O'Peep" diorama. Jones shows the artist at her easel in the New Mexico desert and incorporates elements of her paintings in the scene, including a cow's skull and a twisted cedar tree. 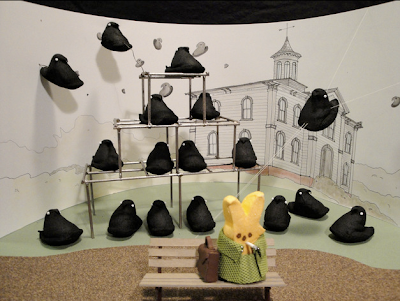 above: Jill Goebel of Alexandria spotlights an unsuspecting Bunny Hedren in her diorama titled "Alfred Hitchcock Presents 'The Peeps'" Goebel writes: "She sits on the bench, tense although she doesn't quite know why. Maybe a cigarette will calm her nerves. Were those wings? Or just the wind?" 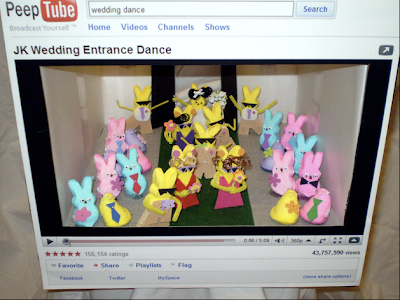 above: Arlington's Katie Behr-Szustakowski made a diorama of the YouTube video that depicted a wedding party making a highly choreographed entrance to Chris Brown's "Forever." The artist re-created a screen shot of the video, and titled her creation "PeepTube: Jill and Kevin's Wedding Entrance Dance."